One of the things I like about my job is the variety. I don’t do financial or technical translation (because I wouldn’t know what I was talking about and you need your translators to know what they are talking about) and over the years I’ve shifted the focus and specialised until I am mainly doing the creative sort of things that I like, but this still covers a huge range of texts/stuff. And people turn up and ask me to do interesting things. A while back, fellow translator and ITI member Ros Mendy asked me to translate a section of a Swedish book which apparently mentioned an Englishwoman who was the beekeeper to the King of Libya in the late 1960s. Well you don’t get that sort of intriguing commission every day.

The book was Blomman i Cyrene (The flower of Cyrene) by Christina Söderling-Brydolf, published in 1970. The flower in question is silphium, used across the ancient Mediterranean and Roman world but now extinct. Christina becomes interested in it on an earlier trip to Libya, picks the expert brains of fellow Swede Vivi Täckholm, professor of Botany at Cairo University, and a year or so later embarks on a quest to discover what it was and whether it still exists. She is joined in this enterprise by Lullu Björkenheim, a Finland-Swede, who is fired with enthusiasm for spending weeks on end rattling round Libya in a Land Rover in search of a possibly non-existent plant. At this point Christina is in her fifties, Lullu is in her late sixties, and the two of them have barely spent more than a couple of days in each other’s company.

It could all have been a disaster. It isn’t. What it is is a hugely entertaining road trip, and travelogue told with self-deprecating irony, with a mystery to resolve as a peg to hang it all on for narrative momentum, and a growing friendship between two redoubtable women who are unfazed by hairpin bends or the prospect of getting lost in the middle of nowhere, and able to cope with abandoning all other plans to screech to a sudden halt whenever a likely plant is spotted at the side of a road. At one point Lullu insists on digging one up entirely unaided:

Peter [Lieutenant Commander Peter Hughes RN] and Jean laughed heartily and shook their heads when they saw us out in the red field, Lullu with her foot on the spade and me with a firm grip on the bottom of the sturdy drias stalk.

Mad or not, it’s an entertaining read, even though (spoilers) no conclusion is ever reached on the identity of the plant. I don’t think this matters. It’s the journey that counts. The other interesting aspect, with hindsight, is that all this is taking place practically on the eve of Gaddafi’s coup. Miss Brittan, as our heroines politely call her, although everyone else they meet in Libya refers to her as “the mad English lady” is beekeeper to King Idris. Within two minutes of meeting her, Christina and Lullu diagnose “paranoia and a severe persecution complex with elements of manic depression” but after discussing botany at length, during which two kettles boil dry and the English tea promised fails to appear, conclude “Our hostess was in fact an utterly lucid, sensible and also educated person, indeed she was the only person we had met in Libya at all who was aware of the country’s history from the days of antiquity”. I was relieved to find from this post at Perpolis on Miss Olive Brittan, Libya’s last queen bee that Olive Brittan did survive the regime change, although she insisted on a very formal ceremony when reluctantly forced to leave, as described by Sir Peter Wakefield here.

Redoubtable women, all. I may well track down some more of Christina Söderling-Brydolf’s travel writing.

I am a competent second alto* and sing in a choral society. This term we were performing Mendelssohn’s Elijah and in dull moments during rehearsals, while the conductor was bashing the sopranos into shape, I was reading the introduction to the score, which provided background information about the history of the oratorio, including a chunk about its translation. The relationship and the correspondence between Mendelssohn and his English translator William Bartholemew is a thing of beauty, mutual esteem, respect and recognition of each other’s fabulous talents.

When their works are going to be sung in translation, composers need good musically-minded translators. I once sang in a performance of Dvorak’s The Spectre’s Bride, where the English was so dreadful (“ho my darling look at me, jump into the cemetery”) that we sang it in incomprehensible Czech instead.

Mendelssohn and his performing choirs over the decades since were better served and he and Bartholemew seem to have worked as a courteous and mutually admiring team, respecting each other’s advice. It was Bartholemew the translator who suggested adding an overture, which Mendelssohn did, and when Bartholemew pointed out that had Mr Mendelssohn noticed that the aria “oh rest in the Lord” began with the same tune as the Scottish folk song Robin Gray, Mendelssohn immediately decided to ditch it altogether, until Bartholemew suggested changing one of the intervals instead: “If you omit it, and especially upon such a reason as my hint may have afforded, I shall be very much pained”.

For his part, Mendelssohn went through Bartholemew’s translation in great detail, consulting backwards and forwards on emphasis and slurring and fitting the notes to the new English text, plus a few authorial objections: “I like all the passages of the translation you send me with but two exceptions. In No. 30, ‘that Thou would’st please destroy me’ sounds so odd to me—is it scriptural? If it is, I have no objection, but if not, pray substitute something else”. The other one he objects to is the addition of “water thy couch”, on which I have to say I agree with him. What was Bartholemew thinking?

“I do dislike this so very much, and it is so poetical in the German version. So if you could substitute something in which no ‘watering of the couch’ occurred, but which gave the idea of the tears, of the night, of all that in its purity. Pray try!”

Oh it is a lovely author/translator relationship.

Much of their correspondence can be found in The History of Mendelssohn’s Oratorio “Elijah” by Frederick George Edwards on Project Gutenberg. Chapter II “The English Translation” includes a picture of William Bartholemew, “chemist, violin player, and excellent flower painter” and man with impressive hair. 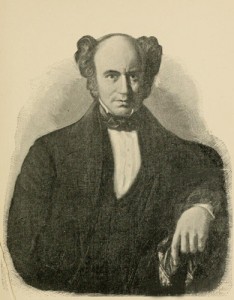 This first letter quoted shows that for all the esteem in which he was held by his client, some of the sufferings of translators today had their parallels in 1846.

“My dear Sir,—I have at last, after toiling day and night, got through the first portion of your noble oratorio. I wish I could render words more worthy of such music. My endeavour has been to keep them as scriptural as possible; and in order that you may be able to judge how far I have succeeded, do me the favour to refer to the verses notified in an English version of the Bible. When the second part, or the parts of that, as they are completed, are sent, I hope we shall have the words in the score written in letters which are readable to us. I know not how so bad a scribe as he who penned the libretto could have been found; words, nay even sentences were omitted, and words changed: leben was written for beten, and there were no references to where the verses might be seen in ‘The Book.’ All these caused me much perplexity, trouble, and, what is worse than all, loss of time. These, too, enhanced by my journeys to Hobart Place, and the necessity of copying by my own hand all the vocal portion of the score for the engravers, and those parts which you will receive through the medium of Mr. Buxton for your perusal and decision, have rendered my toil, although a labour of love, incessant. The choral portions will this day be in the hands of the engravers; and I trust you will send by every packet each of the pieces yet forthcoming—one at a time(52)—never mind how short, for the time is short—and I want all the time to enable me to do it as well as I can. And the choralists want all the time to rehearse it as often as they can, for the more often it is rehearsed the better.

Poor Mr Bartholemew, he’s got the lot. Illegible source text, source text failing to cite references to enable the translator to track down quotes, requesting part delivery due to being squashed between the schedule of the composer and the schedule of the performers, acute time pressure and the nineteenth-century equivalent of having to liaise with the people doing the DTP. And from the later letters, it is clear that Mendelssohn would not stop tinkering with the thing and kept sending him updated versions of the source text. William Bartholemew, we salute you.

*and on occasion an emergency tenor