Well OK they are not that new. To tell the truth, I have been here a year now but I needed to make sure it was working and permanent. It is definitely working and it is definitely permanent as far as I am concerned.  Rather than working full-time from home, which was proving a little fraught amid three children under 13, I am now working in rented studio/office space a ten-minute walk up the hill. It is brilliant. The buildings used to be part of the Victorian brewery and look like this: 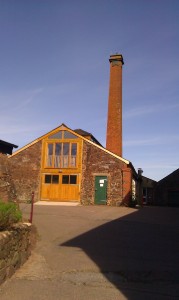 What they are now is a community apple pressing space (because I live in the sort of community that has a community apple juice cooperative) and nine rented studios. There are other people to say hello to in the morning and sometimes to have cups of tea with. The problem of having a job you love is knowing when to stop, and separate workspace makes it easier to set yourself sensible working hours. The walk is enough time to switch from work mode to home mode, and if it isn’t I can take a scenic (and muddy) detour round some fields and/or hills on the way, work-life balance is immeasurably improved and the boundaries between who is in charge of the domestic side when are much much clearer too.

The building has been sensibly converted, retaining as much of the old industrial architecture as possible. 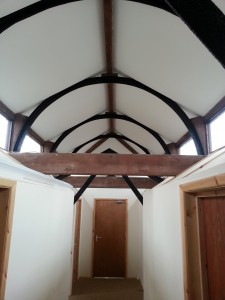 Some of the offices have the metal beams running along the floor, which is very industrially Victorian  of them, but I chose one that doesn’t because the ones in the corner at the end of the corridor give me more headroom for my bookcase.  You need to get your priorities right. 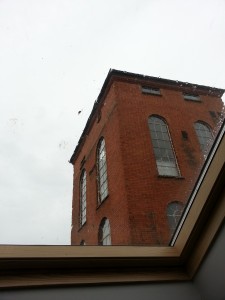 It has been converted into a flat and beneath it is an antiques shop. As my son put it, “Two towers! It’s like Mordor!” Translating amid the forces of evil, that’s me.

When I lived in Bristol, I worked in part of an artist’s studio in a converted stable block at the end of the artist’s garden and this has a similar feel. I even have a friendly artist working downstairs. On Tuesdays in the autumn, the rest of downstairs is full of people pressing apples and it smells fantastic. Although the Victorian buildings are no longer a brewery, there is still a local brewery next door so the rest of the time the air is filled with the smell of beer. Fortunately I don’t object to the smell of beer.

I was recently interviewed about freeelance workspace solutions that aren’t sitting in your back bedroom for The Linguist magazine and Miranda Moore’s article is in The Linguist 53,5 here. Several of us recommend getting out of the house and working in a separate space.